A Q&A WITH PERTH'S ELIJAH WOODS

When Elijah Woods x Jamie Fine earned the right to record and release a song on CTV’s The Launch last month, their world went…well, crazy.

Their song, Ain’t Easy, hit number 1 on iTunes and has received more than 500,000 downloads on Spotify. While The Launch gave them international attention, these two have been producing music long before the show (check out their playlist on Spotify. Seriously – it’s been on repeat here at the Perth Tourism headquarters).

From on-air television and radio interviews to social media outreach, the duo has soaked up the experience while navigating through a busy schedule.

A Perth native, Elijah connected with us to talk about these past three weeks and the journey that got them there, including his time growing up in Perth. 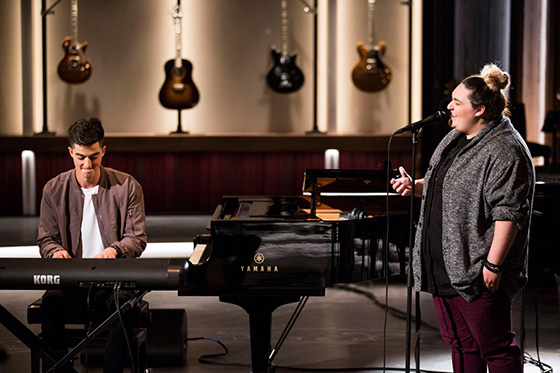 If you had to summarize your time growing up in Perth, how would you describe it?

Growing up in Perth, I attended Stewart School followed by PDCI. I was heavily involved in sports from a young age, primarily focusing on basketball. Being in Perth my whole life has helped shape who I am today. There’s such a sense of community and a natural support system.

How did you get into music? What brought you to come together with Jamie?

I come from a very musical background. My dad taught me to play guitar around the age of 8, and mom was always trying to get me to take piano lessons. I thought I was “too cool” and “too busy with sports”, but soon after realized how much I enjoyed creating music. I began DJ’ing around the age of 15, but found I was limited and quickly turned to music production.  I then taught myself the basics of the keys and received some lessons from the same Perth instructor (Val Levitt) that I had started with when I was a child.

Jamie and I met when I was attending Algonquin College. I was enrolled in the Music Industry Arts program there and heard Jamie’s voice through a mutual friend’s recording. I immediately was captivated, so I dragged her into the studio the following weekend and we clicked. We’ve been writing together ever since.

How did you end up getting on The Launch?

The A&R [Artists and repertoire] team approached us in early 2017. Initially, Jamie and I were sceptical, as we thought our producer-vocalist relationship wouldn’t be showcased in a singing competition. We went back and forth with The Launch team and realized this was the perfect show to demonstrate what Jamie and I were all about; the music.

The experience on the show was very positive. Jam and I can’t say enough about the platform. Everyone involved was so supportive and immediately got who Jamie and I were. The Launch is a unique show because it takes artists who are already somewhat established and “throws gasoline on them” so to speak.

What is one memory that will always stay with you?

One memory that will always stay with me is the time we spent in the studio with Ryan [Tedder, OneRepublic lead vocalist]. He’s a real collaborator, and he works at a pace that Jamie and I relate to. More than anything he was down to earth and supportive of the vision Jamie and I had for our music.

What's it been like for you over these past few weeks?

The last few weeks have been wild. Lots of press, lots of social media outreach, lots of coffee. It’s been an amazing experience to date, and we’re trying to soak up every minute of it. We enjoy moving at this pace. The one thing I wish we both we could do more of is to interact with the people reaching out to us. The outreach (both personally and on social media) has been so overwhelmingly phenomenal that it’s impossible to respond to every single message. We love that interaction, so we make an effort to respond/interact as much as possible.

What's the plan from here? Ideally, where you see yourself going?

We’re really trying to soak up every minute of the journey. For us, this is the fun part. We had an opportunity to be “Launched” into the world (sorry for the pun), and now it’s about exploiting that opportunity for as much as we can. We have so much music ready to go, having the right team behind it will help push that music to as many people as possible.

Anyone you want to thank/credit?

WHERE DO I START haha. I’m lucky enough to have been raised in an amazingly supportive town. As a community, I have nothing but great things to say about Perth. My family has been supportive from day one. My parents Tamara and Jeff are loving, kind, encouraging people. My brother Aiden is one of my biggest inspirations, and I don’t know where/who I’d be without him.

My grandmother Jennifer has been a catalyst in my career. Along with being a source of so much insight, she is one of my best friends. I showed up on her doorstep a few years back asking to build a studio in her basement, and the next day we were there building it- no questions asked. I legitimately could name 100 people to thank, but I’ll save that for the first Grammy :) haha.

Want to listen to Elijah Woods x Jamie Fine? Check out their Spotify Playlist, watch their videos or download their music on iTunes.

You have no news posts saved to your favorites